I spent the month of February working on a private ranch in Raymondville, Texas. Here’s where it lies in comparison to Flagstaff, AZ. (Note: Route pictured is not the route we drove.)

We spent two days driving down, and then it was off to work!

The task was to plant 45,000 shrubs during the month, in order to create a more ocelot-friendly habitat. (An ocelot is pictured below, courtesy of Wikipedia.) 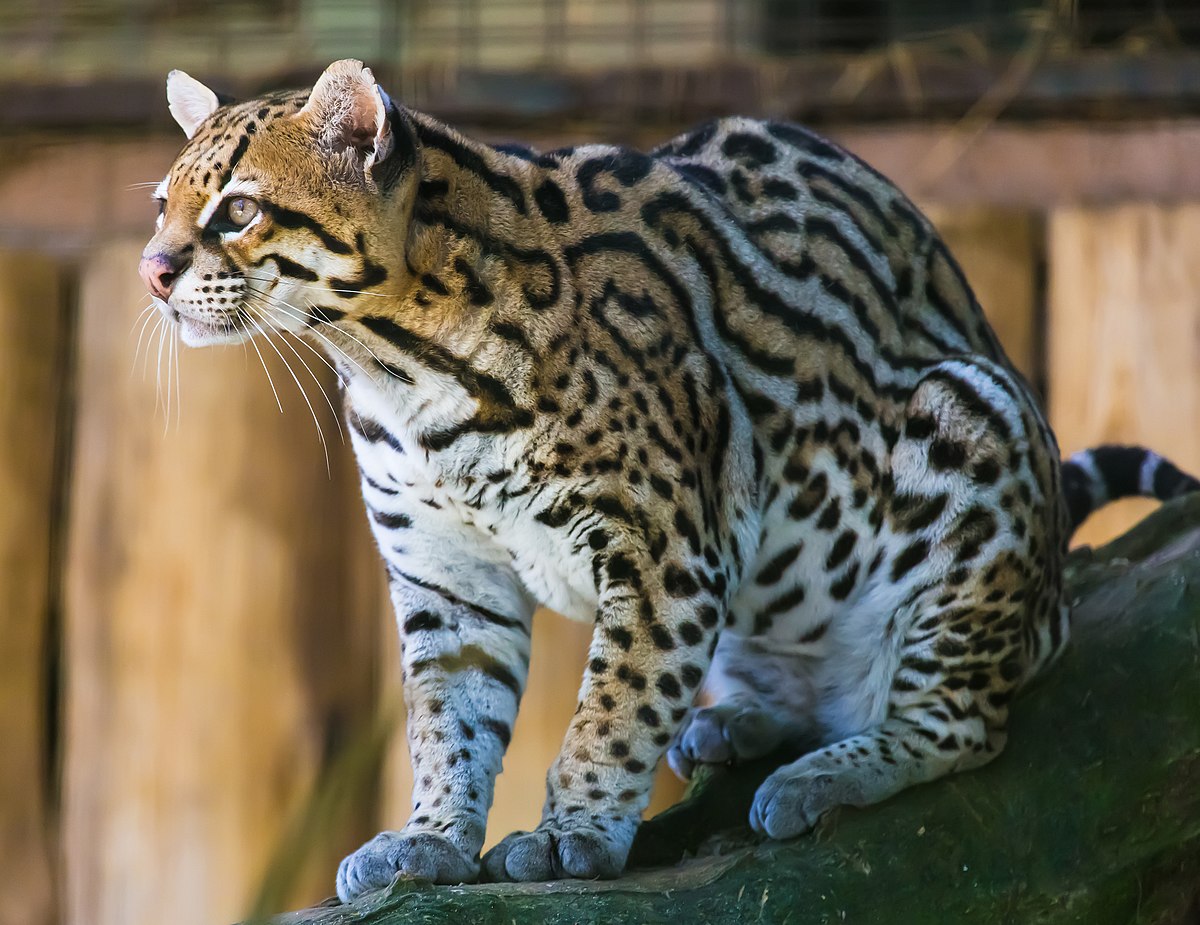 The Frank Yturria Ranch where we worked let U.S. Fish and Wildlife and a local nature conservancy do this project on their land. It felt kind of weird to be working on a conservation project there because the ranch is home to all sorts of exotic animals, for the purpose of hunting. The ranch charges a hefty fee for hunters to come hunt on the land.

So on the drive in each day (20 mph limit within the ranch), we’d see all sorts of wildlife. Deer, javelinas, turkeys, this strange deer/antelope from India, etc. One day we even saw zebras!

There were over 30 varieties of shrubs and they came in these crates of 49 plants.

And the crates were in these trailers of something like 80-90 crates. There were multiple trailers around the property.

Each day the most important number was how many crates we had planted. Our very first day we planted 19 crates, and later we’d get around 30/day, with a high of 52. (Our partner’s original goal for us was 66 crates/day!, which was simply not possible.) Later in the month they brought in a 12-person NCCC AmeriCorps group, and our last three days they also brought in a 6-person ACE crew from the Corpus Christi branch. On the days when all 28 of us were planting, we got 60-64 crates in a day.

For a majority of our work days during the month, we used augers to make holes in the ground. Plants were supposed to be 7′ from each other, which later got changed to 6,’ so that’s how far apart augers made the holes.

Three or four people would auger side by side moving forwards in a straight line, from one end of the plot to the other.

The augers were followed by “tubers,” who would lay a tube next to each hole. (After each plant is planted, tubes are put around the plants to protect them during their first year in the ground.) We set the tubes out right away to make the holes visible and to make the planting go faster.

Finally, someone would walk along with a crate of plants and place a plant at each hole. Everyone else would begin planting at that end while the augers, tubers, and plant-passer-outer continued creating their rows across the plot.

Here’s what a hole would look like for the planters:

First you rip the plant wrapper at the top and fold it over a bit, so the wrapper doesn’t stick out. (It’s biodegradable so we buried the plants in the wrappers; they simply couldn’t stick out of the soil.) Then you put the plant in the hole and pack in dirt tightly around it, followed by sticking the tube in the ground around the plant. Sometimes we could push the tube stakes all the way down into the ground, but we often used a hammer and block to hammer them in. The stakes couldn’t be hit directly with a hammer, which is why we carried around wooden blocks.

When the augers (and distribution group) reached the far end, they would all get on their knees and begin planting and tubing, until we met with the other group in the middle. While I wasn’t using much upper body this whole month, my legs certainly got a workout from jumping up to my feet and back down to my knees over and over.

Another part of our work day was assembling the tubes that we put around the plants. Stakes had to be put through each tube, and then we’d stuff a bag with around 20 tubes to take out into the field. Often there were volunteers who worked on assembling tubes while we planted during the day, but any extra time after finishing our final row of the day was also spent assembling tubes.

Because of all the wildlife, we would find bones all over the fields while we planted. Here’s a deer skeleton spotted one day:

This was a strange hitch for me because our project partners put us up in a motel, so we weren’t in tents all month. It was weird to fill up a motel room with all of our food bins and coolers, and do the cooking in there with a tiny sink.

We also had to drive 90 minutes to different housing for our off days, which meant lots of packing/unpacking the trailer, coolers, etc. all month every three or four days—all done on our “off” time, of course.

Luckily we had a stellar crew, so we had lots of fun together despite some less-ideal work conditions on this hitch.

And that was my first (and only) monthlong while in ACE! Have any questions?